The o (CEO of Based Department Troll Limbaugh)

The not-so ubiquitous The o. Haling from OKBR4 the self name Chief Exclusive Officer of the Based Department joined Irony Hub on July 17th 2020 after hearing or so nice things about the server.

He got banned on January 20th for being a retard and lying and stuff and saying without discord he's nothing holy shit get a life lmao. what no pussy does to a mf

Shortly after the nuke Based was given Trollsome by cas. After this Based chose the Jewish Sleeper Agent as his vanity role. After wiwi was made he lost his vanity. However that didn't stop him. He spent countless hours on VC being based, keking, and grinding which let him to be the #1 vc user in minuets! He then change his name to Troll Limbaugh as refence to Political radio talk show host Rush Limbaugh as both there main things are talking. On November 26th (The server's 6 month anniversary) He was petitioned and earned WIWI after sending moderator Chupa a funny Troll Science rage comic. On December 4th based started his first event known as gif wars in which users dm him gifs which in this case was Christmas themed gifs.

Based firsts server he joined the 4th instalment of the influential OKBR servers in June 2020. He would get retard role a week in his tenure in the server. After joining IH, Based spent less and less time until leaving after a nuke and getting contained by stellar after arguing about the server in general.

Spending less time here based joined dogelore one day. Only notable thing is getting muted for posting a video of drake saying the n-word. His only here for hunger games. 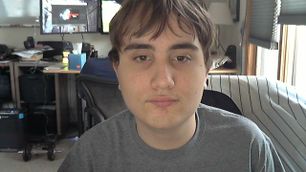 HIS IRL FACE. He Looks Like He Has Not Washed His Hair In A Week

Based is active in The Federal Troll Agency some what and talks Kanye West stuff there. The other servers he is in are mostly just user based servers and non irony servers like the r/Westsubever discord server and sports servers most notably the r/baseball server.

Shockingly, Based does have a life out of discord. Theoden (his real name) dose well in school and collects sports cards as a hobby. He follows sports events and uses twitter and reddit. He also watches you tube where he watches sports content and entertainment reviews and deep dives.