Wavey Davey was an active member of Irony Hub.

He's literally gay; denies being a furry; and doesn't shut the fuck up about his favorite band, Glass Animals. In fact, that's where his name originates; the lead singer of the band, Dave Bayley, is sometimes nicknamed Wavey Davey. 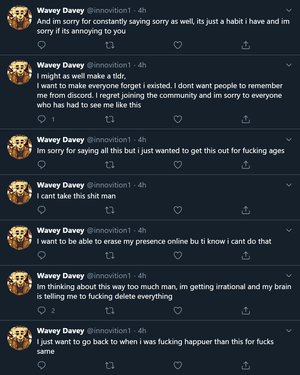 A portion of Wavey Davey's rant on Twitter, made a few hours after leaving Irony Hub

Wavey left Irony Hub on August 7, 2020. He appears to have left permanently, though who knows

I hope you're doing ok Wavey

He is now active on the Dogelore server.