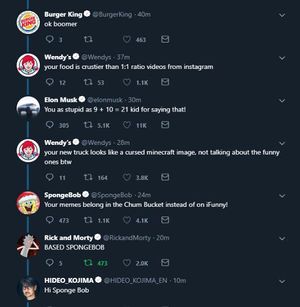 The HIDEO_KOJIMA meme originated from an r/comedyheaven post. The post showed multiple brand and celebrity Twitter accounts replying to each other, in which Hideo Kojima finished it off with "Hi Sponge Bob".

This became a running joke in OKBR3 and Irony Hub.

The meme reached a whole new level with the HIDEO_KOJIMA user.

It started with its Twitter account, where he Tweeted out the famous line "Hi Sponge Bob" on June 18, 2020. Afterward, he started tweeting Hi to various Irony Hub members. This marks the first time Hi Sponge Bob branched out into Hi (anyone).

HIDEO_KOJIMA also joined the Discord, greeting various users sparingly. It is unknown exactly when he joined, as his search history stops at the nuke.

A second HIDEO_KOJIMA user, also known as Fake HIDEO_KOJIMA, came along in October 2020. This one greets people much more often than the first user. But it's NOT the OG Hideo!

This HIDEO_KOJIMA user had the "Was It Worth It?" role and was known for getting banned multiple times by posting NSFW content and then immediately leaving after being muted or contained. Despite promising to end this behavior in his appeals, he would continue to get himself banned several times before finally being put on the Never Unban List on May 23, 2021.