Enzo Gorlami /ˌɛnzoʊ ɡɔːrlˈɑːmi/ is known for being a rather well mannered chap, helped reinvigorate the server with his critically acclaimed Photoshop Contest. He also hosted Irony Hub Got Talent and its sequel, however those are both known for being some of the greatest event trainwrecks in Irony Hub history. He has been praiseed recently for having somewhat of an obsession with irish actress Jessie Buckley, this He even had a small phase where he had a profile picture of her! What a legend! Overral Mr.Gorlami is known as one of the highest quality users not only for his contributions to the server, but also his charming personality and silver tounge. 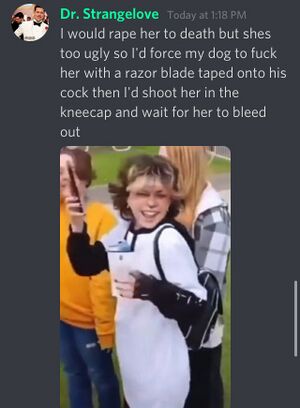 Just one of many examples of Mr. Gorlami's amazing quality
Retrieved from "https://irony.wiki/index.php?title=Enzo_Gorlami&oldid=3491"
Categories:
Hidden category: